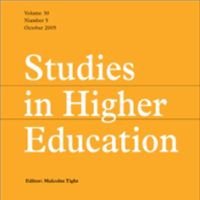 The article aims to empirically verify the impact of educational capital on the success or failure of higher education graduates’ transitions. The paper uses the example of geography graduates in Poland who took part in a nationwide survey in 2012, six months after their graduation.

This allowed the author to collect detailed data on the characteristics of the respondents’ educational capital and their situation in the job market. Discriminant function analysis was used to establish that the following variables are best predictors of one’s situation in the labour market: specialisation and study cycle (BA or MA). Other variables, including the final grade of the degree and the self-assessment of one’s competences were found not to be statistically significant in discriminating between the group of working and unemployed graduates.

Piróg, D. (2014). The impact of degree programme educational capital on the transition of graduates to the labour market. Studies in Higher Education, 41(1) 95-109.