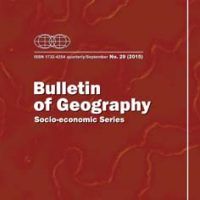 Transition, i.e. the education-to-work shift, is considered one of the most important processes in human life. The characteristics of transition hinge on, first of all, the labour market situation, the economic climate in the region, the educational services market and the aspirations of society.

Virtually unlimited access to education at an academic level and the growing appetite of young people for degrees have resulted in a rapid increase in the number of university graduates. Consequently, there has been a high supply of employees with university degrees. However, the speed and type of transition among recent graduates is one of the least investigated processes on the labour market in Poland. The article presents the results of a survey on how Polish geographers enter the job market. The study compares geographers’ professional qualifications, aspirations and plans about their future job at the time of graduation with the actual fulfilment of those plans six months later. Quantitative analysis of the process shows that half the graduates have succeeded in finding employment. Qualitative analysis of the type of jobs shows that the university-to-work transition was unsatisfactory in many respects. For example, the new position was unlikely to require the graduates to use the competences acquired during the course of study, the job offered limited career development opportunities and had a low remuneration. All the above raise concerns regarding the limited opportunity for successful transition and the respondents’ low satisfaction level.